skip to main | skip to sidebar

On Tuesday, May 1st The Black Rock Arts Foundation proudly announced the installation of artist Candy Chang's interactive mural, Before I Die… at two locations in downtown Reno. You can read the full press release here.


Chang's Before I Die... murals are approximately 40 feet wide by eight feet tall. Walls are painted with black chalkboard paint. Stenciled on the walls is the phrase “Before I Die I want to __________,” dozens of times. Using the chalk provided, people may write in their response to the prompt. The resulting completed phrases vary greatly, reflecting the diversity of the participating individuals. The phrases are playful, somber, hopeful, healing, joyful, introspective, humorous, moving, and everywhere in between, but all hold the commonality of poignant honesty.


Before I Die... is an interactive public art project that transforms neglected spaces into public venues for constructive conversation and empowering self-expression. The evolving nature of this piece gradually reveals the hopes and dreams of the community. The piece emerges slowly over time, beginning as a small collection of individual responses, but quickly becoming a visual representation of many voices, all expressing very human hopes and concerns.

In collaboration with BRAF's Civic Arts program, Chang produced a mural at Sierra St and Island Avenue, and another in front of Apex Products at 415 East Fourth Street in Reno, Nevada. They will be on display, for the benefit of the community, for at least the next six months. This is BRAF's sixth public art installation produced in collaboration with the Reno community and with the support of the City of Reno Arts and Culture Commission.

Be sure to visit and contribute to the two Before I Die... installations in Reno (at Sierra Arts and on 4th Street). It's an inspirational exercise for people of all ages. You might also consider adding your expression of "Before I die I want to ____" in the comments below! 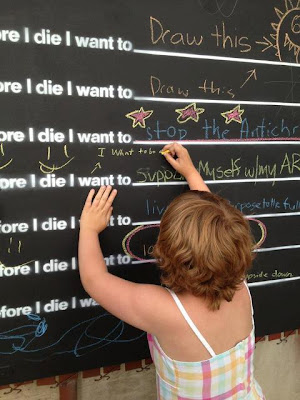 Our deepest gratitude to Maria Partridge, our Advisory Board Member, Larry DeVincenzi, our Reno Public Relations Expert, The Nevada Museum of Art, and The City of Reno Arts and Culture Commission for their generous grant. We'd also like to express our appreciation to all the volunteers who came out for the installation. Thank you for making this excellent piece happen!


We have heard a rumor that there just might be a Before I Die... wall at an undisclosed temporary city in the northern Nevada desert this summer. hmmm....


For more information about this inspiring project, check out BRAF's website and the Black Rock Arts Foundation - Reno Facebook Page.
Posted by The Minister of Purpleganda at 6:00 PM 1 comment:

Email ThisBlogThis!Share to TwitterShare to FacebookShare to Pinterest
Labels: Before I Die..., Reno

Thank you to everyone who attended the fabulous second installment of ArtPadSF on May 18th. It was an exceptional night celebrating the wealth of our artistic community in the Bay Area. Attendance and spirits were high as patrons explored the converted rooms of the Phoenix Hotel.


"ArtPadSF at the iconic Phoenix Hotel is a provocative 21st century boutique art fair that focuses on emerging and contemporary art from the Bay Area and beyond. Partnered with San Francisco’s world-renowned arts institutions, galleries, and artists, ArtPadSF is a crossroads for the creative and an unparalleled marketplace for art." From ArtPadSF.com

The Black Rock Arts Foundation hosted a gallery featuring artists in our extended community, including art by BRAF Board Members Crimson Rose and Will Rogers, and by BRAF artists like Michelle Palmer of the Flaming Lotus Girls and by Marco Cochrane, artist of Bliss Dance.


During the event, Marco Cochrane live sculpted artist Laura Kimpton! It was incredible to watch. In just a few hours, Marco created an exceptional likeness of our beloved Laura.


The opening gala also featured epic performances by some of the formost musicians and performers in our community.

Many thanks to Chip Conley, Founder and Executive Chairman of Joie De Vivre Hotels, and ArtPadSF director, Maria Jenson, for inviting us to participate in this unique and fun event. We're thrilled to be a part of the emergence of ArtPadSF!


For more impressions of the event, check out this lovely write up in SFWire.
Posted by The Minister of Purpleganda at 11:30 AM No comments:

Email ThisBlogThis!Share to TwitterShare to FacebookShare to Pinterest
Labels: ArtPadsf

Future's Past Now On View in Hayes Valley


BRAF and the Hayes Valley Arts Coalition (HVAC) have teamed up again to bring another beloved work from the Burning Man community to San Francisco.


We hope you could join us for the Opening Reception on May 10 to welcome Future's Past, by Kate Raudenbush, to its new home at Patricia's Green.

The work will be on display for at least one year. Lighting effects turn on shortly after dusk, and remain on all night.

Thanks to George Post, who attended our reception and took these great photos. 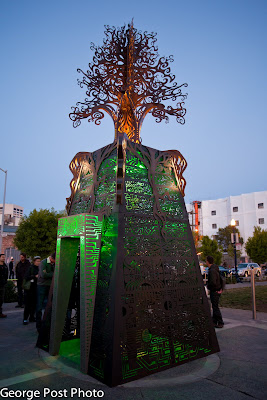 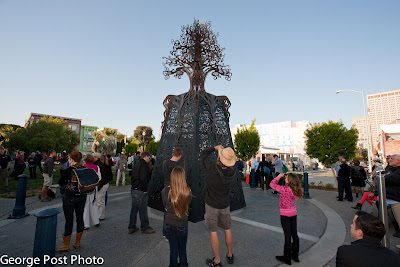 Love this project? Support more like it, and make a donation to our Civic Arts Program today!
Posted by Black Rock Arts Foundation at 6:08 PM No comments:

Exhibition of artwork by Android Jones to benefit BRAF! 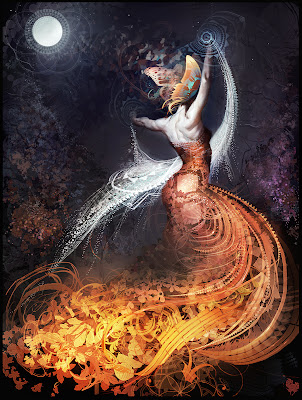 This is the second in a series of exhibits of 2D work by Burning Man regulars, curated by LadyBee. 20% of the profits will be donated to the Black Rock Arts Foundation. Thanks Blowfish and Android Jones!

Android Jones is at the forefront of the visionary art movement, a wave of artists who emphasize creativity as the foundation of consciousness and an agent of social change. As a digital alchemist, Android builds on the technical developments of past centuries in art history while pushing the boundaries of the imagination with new technology and media forms. Moving beyond pencils, ink, and brushes, Android develops latent possibilities within software programs such as Painter, Photoshop, ZBrush, and Alchemy, discovering new combinations and uses for tools that exceed the original intentions of their programmers.

In Android's live art performances, including the acclaimed Phadroid dance performances with wife Phaedra Ana, he incorporates elements of chance and improvisation, inviting synchronicities that additionally exceed the individual artist's intentions and allow for unscripted moments of beauty to shine through. As an experience designer, Android has contributed to films, games, and to building communities through www.conceptart.org and www.dreamcatcher.net, and his interactive installations have enchanted tens of thousands of participants at events like Boom and Burning Man.

Viewing the digital domain as a medium of energy and light capable of expanding the nature of reality, Android's art encourages others to explore the potential interfaces of mind and machine in this time of accelerating change and increasing novelty. To this end, Android's art serves two related functions: it bears witness to realities accessible through heightened states of consciousness, and it also engenders heightened awareness through the processes of creation and audience interaction. Digital art becomes a tool for navigating reality and human awareness, and Android's art invites others to join the advancing evolution of consciousness by speaking to the artist in everyone. www.androidjones.com
Posted by Black Rock Arts Foundation at 7:25 AM No comments:

The Spirit of the Man Exhibition

The Black Rock Arts Foundation is proud to announce our support of The Spirit of the Man exhibition in Santa Rosa, California.

The Spirit of the Man, a new sculpture exhibition at Paradise Ridge Winery, opens on May 20, 2012. This yearlong show features 38 major works by sculptors based locally and throughout the United States, many of whom are well known and loved among BRAF's community.

The Voigt Family Sculpture Foundation shares BRAF's goals of creating new, accessible venues for public art, and of sharing our favorite works of art with the greater community.

In addition to the opening celebration on May 20, there will be both educational and festive events focused around solstices, equinoxes and eclipses, all incorporating a message about the value of publicly accessible art.

About the Voigt Family Sculpture Foundation

More than an art exhibition, The Spirit of the Man honors artist and art patron Al Voigt, co-founder of the Voigt Family Sculpture Foundation, who passed away in 2011. Al’s generosity and artistic vision are widely recognized for boosting the quality and quantity of public art in Northern California.


Posted by Black Rock Arts Foundation at 1:07 PM No comments:

Future's Past Installation in Hayes Valley


Kate Raudenbush and crew are busy installing Future's Past at Patricia's Green in Hayes Valley. Join her, her crew and BRAF's lively community of supporters at the Opening Reception, this Thursday!

Gather with your fellow BRAF and Burning Man art supporters and enjoy live entertainment and treats! 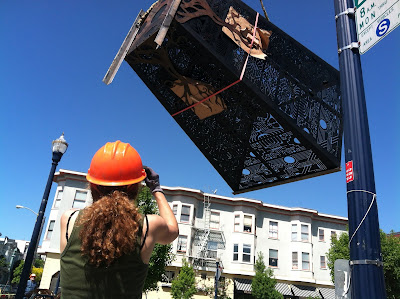 Kate watches as her piece is raised into the air, 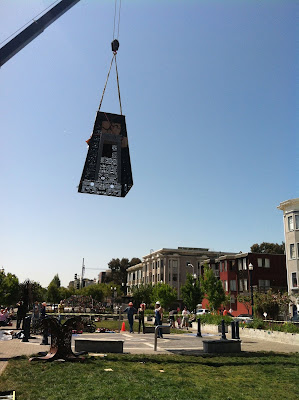 ... carefully hoisted over its new site, 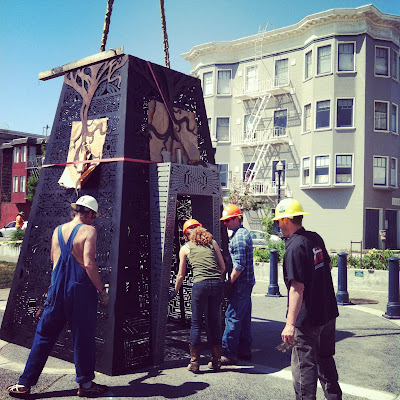 ... and guided into place by her crew.


Funding is still needed for this project. Visit blackrockarts.org and make a donation today!

First exhibited at Burning Man in 2010, Future’s Past is an ornate metal sculpture standing 24 feet tall, and tells a story of civilization being reclaimed by nature. The 12-foot base of the piece harkens an ancient pyramid. Springing from its top is an ornate 12-foot Bodhi tree, a symbol of freedom from earthly attachments. At night, eerie green light shines through the finely cut, circuit board-like patterns in the base’s walls.

With references to both the future and the past, to both decay and renewal, Future's Past is conceptually an ideal fit for the reclaimed urban space of Patricia's Green in Hayes Valley, a public park where many residents and visitors find pause from their busy lives.

BRAF and HVAC have worked together to curate meaningful, relevant artworks for the Hayes Valley community. This will be HVAC’s seventh art installation. HVAC and BRAF share the belief that art can inspire lasting, meaningful connections between people. This site has become a case study for how art can build community and foster a vibrant civic landscape.

We hope you can join us at the Reception!

Posted by Black Rock Arts Foundation at 12:57 PM No comments:

Email ThisBlogThis!Share to TwitterShare to FacebookShare to Pinterest
Labels: Future's Past, Patricia's Green 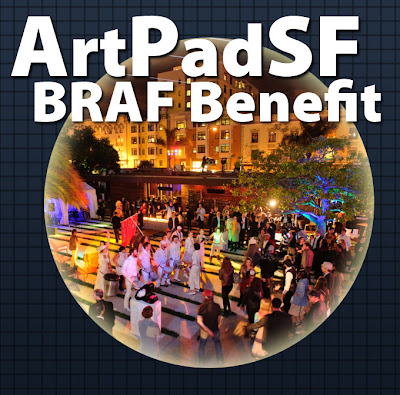 If you were able to attend our special event at ArtPad SF last year, you know how unique and fun this event is. Join us for a festive gathering of BRAF's community of supporters, Burning Man's art lovers, and the Bay Area's leading art galleries and art scene.

ArtPadSF invites San Francisco’s world-renowned museums, galleries, arts institutions, and artists to transform the Phoenix Hotel into an alternative venue for art. The hotel is reinvented as a vibrant and visionary community of prominent international and local artists.

The art fair culminates in a lively evening of performance art, fashion, dance, music and art experiences on Friday night. This unique event celebrates the wealth of local talent in the Bay Area, and raises funds to benefit the Black Rock Arts Foundation's public art and grant programs.
BUY YOUR TICKETS HERE

7:00 pm - 1:00 am
$30 Tier 1 limited advance tickets
$40 Tier 2 and at the Door as available
One complimentary welcome drink
Access to All ArtPad Gallery Rooms until 8pm
(Galleries open at their discretion after 8pm)
Gallery, art, music, performers and visual arts feast until late

Stay tuned for announcement of performers and artists!


Black Rock Arts is a 501(c)3 non-profit. A portion of your ticket price is tax-deductible.

poster: Jared Gutekunst
Posted by affinity at 5:25 AM No comments: